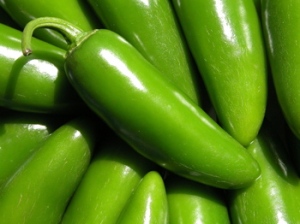 The jalapeno is a medium to large size chilli pepper which is prized For its warm, burning sensation when eaten. Ripe, the jalapeno can be 2 – 3 ½ inches long and is commonly sold when still green. It is cultivar of the species originating in Mexico. It is named after the town of Xalapa, Veracruz, where it was traditionally produced. 160 square kilometres are dedicated For the cultivation of jalapeno in Mexico alone, primarily in the Papaloapan river basin in the North of the state of Veracruz and in the Delicias, Chihuahua area. Jalapenos are also cultivated on smaller scales in Jalisco, Nayarit, Sonora, Sinaloa and Chiapas. The jalapeno is known by different names throughout Mexico, such as cuaresmenos, huachinangos, and Chile gordos.

As of 1999, 5, 500 acres (22km. Sq.) in he United States were dedicated to the cultivation of Jalapenos. Most jalapenos were produced in Southern New Mexico ad western Texas.

Jalapenos are a pod type of capsicum. The growing period For a jalapeno plant is 70 – 80 days. When mature, the plant stands two and a half to three Feet tall. Typically, a single plant will produce twenty Five to thirty Five pods. During a growing period, a plant will be picked multiple times. As the growing season comes to an end, the jalapenos start to turn red. The Fresh market consists of green jalapenos, and red jalapenos are considered inferior. Growers often either discard the red jalaenos into the ground or use them For the production of chipotles.

The jalapeno rates between 2500 and 10000 Scoville units in heat. In comparison with other chilli peppers, the jalapeno has a heat level that varies From mild to hot depending on cultivation and preparation. The heat, which is caused by capsaicin and related compounds, is concentrated in the veins surrounding the seeds, which are called picante. – Deseeding and deveining can reduce the the heat imparted to a recipe that includes jalapenos. They also have a distinct acidic taste. Handling Fresh jalapenos may cause mild skin irritation in some individuals. Some handlers choose to wear latex or vinyl gloves while cutting, skinning, or seeding jalapenos.

1 thought on “Vegetable Of The Week JALAPENOS”