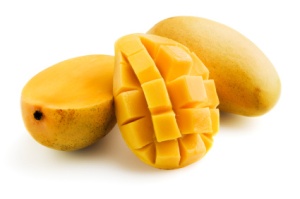 Mangoes belong to the genus Mangifera, consisting of numerous species of tropical fruiting trees in the flowering plant family Anacardiaceae. The mango is indigenous to the Indian Subcontinent. Cultivated in many tropical regions and distributed widely in the world, mango is one of the most extensively exploited fruits for food, juice, flavor, fragrance and color, making it a common ingredient in new functional foods often called superfruits. Its leaves are ritually used as floral decorations at weddings and religious ceremonies. It is also the national fruit of India, Pakistan and the Philippines.

The word mango comes from the Portuguese manga, which is probably derived from the Malayalam മാങ്ങ (māṅṅa; pronounced “manga”). The word’s first recorded attestation in a European language was a text by Ludovico di Varthema in Italian in 1510, as Manga; the first recorded occurrences in languages such as French and post-classical Latin appear to be translations from this Italian text. The origin of the -o ending in English is unclear.

Mango trees (Mangifera indica L.) reach 35–40 m in height, with a crown radius of 10 m. The tree is long-lived with some specimens known to be over 300 years old and still fruiting. In deep soil the taproot descends to a depth of 20 feet, and the profuse, wide-spreading feeder roots also send down many anchor roots which penetrate for several feet. The leaves are evergreen, alternate, simple, 15–35 cm long and 6–16 cm broad; when the leaves are young they are orange-pink, rapidly changing to a dark glossy red, then dark green as they mature. The flowers are produced in terminal panicles 10–40 cm long; each flower is small and white with five petals 5–10 mm long, with a mild sweet odor suggestive of lily of the valley. The fruit takes from three to six months to ripen.

The ripe fruit is variable in size and color, and may be yellow, orange, red or green when ripe, depending on the cultivar.When ripe, the unpeeled fruit gives off a distinctive resinous sweet smell. In its center is a single flat oblong seed that can be fibrous or hairy on the surface, depending on the cultivar. Inside the seed coat 1–2 mm thick is a thin lining covering a single embryo, 4–7 cm long, 3–4 cm wide, and 1 cm thick.

Mangoes have been cultivated in the Indian subcontinent for thousands of years and reached East Asia between the 5th-4th century BC. By the 10th century AD, they were transported to East Africa and subsequently introduced to Brazil, West Indies and Mexico, where climate allows its appropriate growth. The 14th century Muslim traveler, Ibn Battuta, reported it at Mogadishu. Mango is now cultivated as a fruit tree in frost-free tropical and warmer subtropical climates like that of the Indian subcontinent; nearly half of the world’s mangoes are cultivated in India alone.

Other regions where mango is cultivated include North, South and Central America, the Caribbean, south, west and central Africa, Australia, China, Pakistan and Southeast Asia. It is easily cultivated yielding more than 1,000 cultivars, ranging from the “turpentine mango” (named for its strong taste of turpentine, which according to the Oxford Companion to Food some varieties actually contain) to the huevos de toro (“eggs of the bull”, a euphemism for “bull’s testicles”, referring to the shape and size).

Nicknamed “king of mangoes”, the Alphonso grown mainly in Devgad, Sindhudurg and Ratnagiri Districts of Maharashtra, India and favored there, is now popular in the United States. Though India is the largest producer of mangoes in the world, it accounts for less than one percent of the global mango trade.

A ripe mango is sweet, with a unique taste that nevertheless varies from variety to variety. The texture of the flesh varies between cultivars, some having a soft, pulpy texture similar to an over-ripe plum, while others have firmer flesh like a cantaloupe or avocado. In some cultivars, the flesh has a fibrous texture.

A pack of amchur (or dry mango) powder in India.Mango lassi [mango smoothie] is very popular in Indian restaurants in some countries.

In western recipes of ‘Chutney’, ripe mangoes are often used, but chutney in the Indian subcontinent is usually made with sour, unripe mangoes and hot chilis or limes.

In India, ripe mangoes are often cut into thin layers, desiccated, folded, and then cut. These bars, known as aampapdi,’ amavat or halva in Hindi, are similar to dried guava fruit bars available in Colombia. In many parts of India, people eat squeezed mango juice (called ras) on a variety of bread. This is part of the meal rather than a dessert. Unripe mangoes (which are extremely sour) are eaten with salt, and in regions where food is hotter, with salt and chili.

In Kerala, ripe mangoes are used in a dish called mambazha kaalan.

In Maharashtra,moramba (a kind of preserve, made from jaggery and mango) and aamrus (Pulp/Thick Juice made of mangoes, with a bit of sugar if needed and milk at times) are famous. A spicy, sweet and sour semi-liquid side-dish called meth-amba is made from unripe mango slices called kairi, jaggery and fenugreek seeds. They can be enjoyed with poories and polies, like jam.

During the hot summer months, a cooling summer drink called panha (in Marathi) and panna (across north India) is made with raw mango. Mango lassi is made by adding mango pulp to the North Indian yoghurt drink lassi.

The fruit is also used in a variety of cereal products, in particular muesli and oat granola.

Dried and powdered unripe mango is known as amchur (sometimes spelled amchoor) in India and ambi in Urdu. Amb is a Sindhi, aamba a Marathi, and aam a Hindi, Urdu, Punjabi, and Bengali word for ‘mango’.

In the Philippines, unripe mango is eaten with bagoong. Dried strips of sweet, ripe mango are also popular, with those from Cebu exported worldwide. Guimaras produces a delicious mango.

Freshly harvested mangoes and bananas at a fruit stand on the island of Maui, Hawaii.In Mexico, mango is used to make juices, smoothies, ice cream, fruit bars, raspados, aguas frescas, pies and sweet chili sauce, or mixed with chamoy, a sweet and spicy chili paste. It is popular on a stick dipped in hot chili powder and salt or also as a main ingredient in fresh fruit combinations.

Pieces of mango can be mashed and used as a topping on ice cream or blended with milk and ice as milkshakes. In Thailand and other South East Asian countries, sweet glutinous rice is flavored with coconut then served with sliced mango as a dessert.

In Taiwan, mango is a topping that can be added to shaved ice along with condensed milk.

The sweet bell pepper (capsicum) was once known as mango in parts of the United States.

In Central America (Guatemala, El Salvador, Honduras, Nicaragua and Costa Rica), mango is either eaten green with salt, pepper and hot sauce, or ripe in various forms. Only in Costa Rica, ripe mangoes are called manga to differentiate them. In Guatemala, toasted and ground pumpkin seed (called Pepita) with lime and salt are the norm when eating green mangoes.

Alphonso, Benishan or Benishaan (Banganpalli in Telugu and Tamil) and Kesar mango varieties are considered among the best mangoes in the Southern states whereas Dussehri and Langda varieties are most popular in the Northern states of India. Commonly exported, the Alphonso cultivar is grown exclusively in the Konkan region of Maharashtra.[citation needed. Alphonso is named after Afonso De Albuquerque who reputedly brought the drupe on his journeys to Goa.[citation needed] The locals took to calling this Aphoos in Konkani and in Maharashtra the pronunciation got further corrupted to Hapoos. This variety then was taken to the Konkan region of Maharashtra and other parts of India. Andhra Pradesh and Karnataka states in the south, Gujarat in western India, and Uttar Pradesh and Bihar in the north are major producers of mangoes harvested especially to make spicy mango pickles having regional differences in taste. In Pakistan the popular mangoes are the Sindhri and Chaunsa, besides other varieties like Langra, Anwar Ratoal and Malva. The Sindhri mango is primarily produced in the province of Sindh and can measure up to half a foot in length. It is generally considered one of the best mangoes in the world.[citation needed] Generally, once ripe, mangoes have an orange-yellow or reddish peel and are juicy for eating while those intended for export are often picked while under-ripe with green peels. Although producing ethylene while ripening, unripened exported mangoes do not have the same juiciness or flavor as fresh fruit.

Native green mangoes from the Philippines.Mangoes are popular throughout Latin America. In Mexico, sliced mango is eaten with chili powder and/or salt. Street vendors sell whole mangoes on a stick, dipped in the chili-salt mixture. In Indonesia and Thailand, green mango is sold by street vendors with sugar and salt and/or chili, or used in a sour salad called rujak or rojak in Malaysia and Singapore. Ayurveda considers ripe mango sweet and heating, balancing all three doshas (humors), while also providing energy. Powdered raw mango is a condiment in various cuisines.

Like other drupaceous fruits, mangoes come in both freestone and clingstone varieties.

Ayesha’s Kitchen is the best place to Find Mango Recipes:

2 thoughts on “Fruit Of The Week MANGO”