Namak gosht is entrely a Pakistani delicacy which is not so famous but people who know about it, love it,…. it is cooked with green chilli paste and black pepper without tomatoes and red chilli powder, try it, love it and comment it … 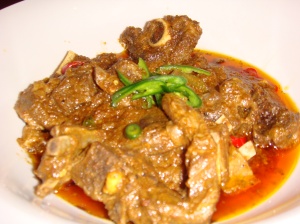 IF COOKING MEAT DRECTLY IN MASALA

-Marinate the meat with papaya paste if you are going to cook the meat directly in masala.

-Heat oil in a pan and fry onions, ginger paste and whole garam masala in it for 5 minutes. Now add marinated goat meat and fry for 5 – 6 minutes until the meat starts changing its color. When the moisture evaporates, add yogurt and other spices and coo well.

-Cook it covered on low heat for 30 minutes or until its well-cooked and the oil comes up to the masala surface.

IF COOKING MEAT AFTER BOILING

-In a deep pan add everything except, green chillies, ginger and cilantro and boil in 3 cups of water until the meat is well-cooked and masala is formed. Now add yogurt and roast the meat. Cook on low heat until it is done.

-Add garnishing material and serve hot. (The taste is just the same)

IF COOKING IN PRESSURE COOKER

-In a pressure cooker heat oil and fry onions, whole garam masala and ginger paste for 5 – 10 minutes or until the onions are lightly brown. Add meat and stir fry. When the moisture evaporates, add yogurt and other spices and give it pressure for 30 minutes on low medium heat.

-Now very carefully open the lid and stir and simmer. Add some water if needed.