A pea is most commonly the small spherical seed or the seed-pod of the legume Pisum sativum. Each pod contains several peas. Although it is botanically a fruit, it is treated as a vegetable in cooking. The name is also used to describe other edible seeds from the Fabaceae such as the pigeon pea (Cajanus cajan), the cowpea (Vigna unguiculata), and the seeds from several species of Lathyrus.

P. sativum is an annual plant, with a life cycle of one year. It is a cool season crop grown in many parts of the world; planting can take place from winter through to early summer depending on location. The average pea weighs between 0.1 and 0.36 grams. The species is used as a vegetable – fresh, frozen or canned, and is also grown to produce dry peas like the split pea. These varieties are typically called field peas.

The wild pea is restricted to the Mediterranean basin and the Near East. The earliest archaeological finds of peas come from Neolithic Syria, Turkey and Jordan. In Egypt, early finds come from c. 4800–4400 BC in the delta area, and from c. 3800–3600 BC in Upper Egypt. The pea was also present in 5th millennium BC Georgia. Further east, the finds are younger. Pea remains were retrieved from Afghanistan c. 2000 BC. They were present in 2250–1750 BC Harappa Pakistan and north-west India, from the older phases of this culture onward. In the second half of the 2nd millennium BC this pulse crop appears in the Gangetic basin and southern India.

The pea is a green, pod-shaped vegetable, widely grown as a cool-season vegetable crop. The seeds may be planted as soon as the soil temperature reaches 10°C (50°F), with the plants growing best at temperatures of 13 to 18°C (55°F-65°F). They do not thrive in the summer heat of warmer temperate and lowland tropical climates but do grow well in cooler high altitude tropical areas. Many cultivars reach maturity about 60 days after planting. Generally, peas are to be grown outdoors during the winter, not in greenhouses. Peas grow best in slightly acidic, well-drained soils.

Peas have both low-growing and vining cultivars. The vining cultivars grow thin tendrils from leaves that coil around any available support and can climb to be 1–2 m high. A traditional approach to supporting climbing peas is to thrust branches pruned from trees or other woody plants upright into the soil, providing a lattice for the peas to climb. Branches used in this fashion are sometimes called pea brush. Metal fences, twine, or netting supported by a frame are used for the same purpose. In dense plantings, peas give each other some measure of mutual support. Pea plants can self-pollinate.

Frozen green peasIn early times, peas were grown mostly for their dry seeds. In modern times, however, peas are usually boiled or steamed, which breaks down the cell walls and makes the taste sweeter and the nutrients more bio-available. Along with broad beans and lentils, these formed an important part of the diet of most people in Europe during the Middle Ages (Bianchini 1975 p 40). By the 1600s and 1700s it had become popular to eat peas “green”, that is, while they are immature and right after they are picked. This was especially true in France and England, where the eating of green peas was said to be “both a fashion and a madness” (OSU 2006). New cultivars of peas were developed by the English during this time which became known as garden peas and English peas. The popularity of green peas spread to North America. Thomas Jefferson grew more than 30 cultivars of peas on his estate (Kafka 2005 p 297). With the invention of canning and freezing of foods, green peas became available year-round, and not just in the spring as before.

Peas in a dishFresh peas are often eaten boiled and flavored with butter and/or spearmint as a side dish vegetable. Salt and pepper are also commonly added to peas when served. Fresh peas are also used in pot pies, salads and casseroles. Pod peas (particularly sweet cultivars called mange tout and sugar peas, or the flatter “snow peas,” called hé lán dòu, 荷兰豆 in Chinese) are used in stir-fried dishes, particularly those in American Chinese cuisine.[1] Pea pods do not keep well once picked, and if not used quickly are best preserved by drying, canning or freezing within a few hours of harvest.

In India, fresh peas are used in various dishes such as aloo matar (curried potatoes with peas) or matar paneer (paneer cheese with peas), though they can be substituted with frozen peas as well. Peas are also eaten raw, as they are sweet when fresh off the bush. Split peas are also used to make dhal, particularly in Guyana, and Trinidad, where there is a significant population of Indians.

Dried peas are often made into a soup or simply eaten on their own. In Japan, China, Taiwan and some Southeast Asian countries, including Thailand and Malaysia, the peas are roasted and salted, and eaten as snacks. In the UK, dried yellow split peas are used to make pease pudding (or “pease porridge”), a traditional dish. In North America, a similarly traditional dish is split pea soup.

Dry, yellow split peasÄrtsoppa is a traditional Scandinavian food which predates the Viking era. This food was made from a fast-growing pea that would mature in a short growing season. Ärtsoppa was especially popular among the many poor who traditionally only had one pot and everything was cooked together for a dinner using a tripod to hold the pot over the fire. When pork was available it was known as Ärtsoppa och fläsk and this tradition has continued to the present day. After the Christian conversion this soup was served on Thursday evening because Friday was a fasting day.

In Greece, Turkey, Cyprus, and other parts of the Mediterranean, peas are made into a stew with meat and potatoes.

Wasabi peas.In the United Kingdom, dried, rehydrated and mashed marrowfat peas, known by the public as mushy peas, are popular, originally in the north of England but now ubiquitously, and especially as an accompaniment to fish and chips or meat pies, particularly in fish and chip shops. Sodium bicarbonate is sometimes added to soften the peas. In 2005, a poll of 2,000 people revealed the pea to be Britain’s 7th favorite culinary vegetable.[citation needed]

Processed peas are mature peas which have been dried, soaked and then heat treated (processed) to prevent spoilage—in the same manner as pasteurising. Cooked peas are sometimes sold dried and coated with wasabi as a spicy snack.

Some forms of etiquette require that peas be only eaten with a fork and not pushed onto the fork with a knife. 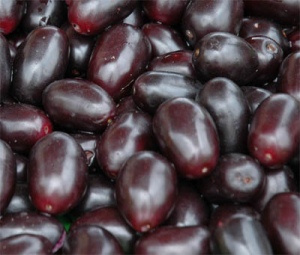 It is also grown in other areas of southern and southeastern Asia including the Philippines, Myanmar, and Afghanistan. The tree was also introduced to Florida, USA in 1911 by the USDA, and is also now commonly planted in Suriname. In Brazil, where it was introduced from India during Portuguese colonization, it has dispersed spontaneously in the wild in some places, as its fruits are eagerly sought by various native birds such as thrushes, tanagers and the Great Kiskadee. Scientific synonyms include Syzygium jambolanum, Eugenia cumini and Eugenia jambolana.

A fairly fast growing species, it can reach heights of up to 30 m and can live more than 100 years. Its dense foliage provides shade and is grown just for its ornamental value. The wood is strong and is water resistant. Because of this it is used in railway sleepers and to install motors in wells. It is sometimes used to make cheap furniture and village dwellings though it is relatively hard to work on.

Jamun trees start flowering from March to April. The flowers of Jamun are fragrant and small, about 5 mm in diameter. The fruits develop by May or June and resemble large berries. The fruit is oblong, ovoid, starts green and turns pink to shining crimson black as it matures. A variant of the tree produces white coloured fruit. The fruit has a combination of sweet, mildly sour and astringent flavour and tends to colour the tongue purple. The seed is also used in various alternative healing systems like Ayurveda (to control diabetes, for example, Unani and Chinese medicine for digestive ailments. The leaves and bark are used for controlling blood pressure and gingivitis. Wine and vinegar are also made from the fruit. It has a high source in vitamin A and vitamin C.

Jambul has been spread overseas from India by Indian emigrants and at present is common in former tropical British colonies.